Bhutan, a jewel between India and China, is about the size of Switzerland with a population of around 750,000. Within its small boundaries the ecological diversity is amazing; tropical jungles in the south with elephants, rhinoceros, and tigers, coniferous forest in the mid region with leopards, mountain goats, bears, and variety of bird life, and blue sheep and snow leopards in the high temperature zones. Through centuries of self-imposed isolation Bhutan has been able to preserve its spectacular environment and nurture its unique culture. Drawing inspiration from its neighbour, Tibet, Tantric Buddhism has flourished and influenced art, crafts, architecture for hundreds of years, and has shaped the Bhutanese way of life. The early 1960s saw Bhutan's first cautious opening to the outside world. Tourism began for the first time on June 2nd 1974, the coronation day of the nineteen year old King Jigme Singye Wangchuck, the fourth monarch.

The idea of happiness and wellbeing as the goal of development has always been a part of Bhutanese political psyche. While this has influenced Bhutan's development endeavors during the early part of the modernization process, it was not pursed as a deliberate policy goal until His Majesty the Fourth King of Bhutan introduced Gross National Happiness (GNH) to define the official development paradigm for Bhutan. 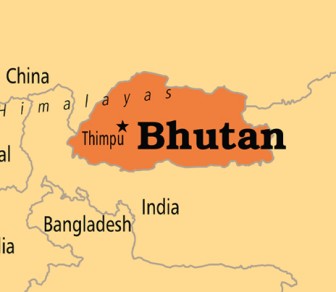 Religious festivals are perfect occasions to glimpse what might be termed Bhutanese culture. Celebrated throughout the country, they occur in a host of differing forms, depending upon the scale, the nature of the ceremonies performed or the particular deity being revered. The best known are the Tshechus, festivals which honor Guru Rinpoche and celebrate one of his remarkable actions, and the most popular of these take place annually in or around the great dzongs, attracting both tourists and large numbers from the surrounding districts. Lasting several days, the central focuses are the series of prayers and religion inspired dances. These dances, made especially striking by the spectacular costumes of the dancers - bright silks and rich brocade, ornate hats or extraordinary masks - may either depict morality tales, invoke protection from demonic spirits or proclaim Buddhist victories and the glory of remarkable saints.

And then there are the atsaras - clowns sporting fiendish masks, making lewd gestures and cracking salacious jokes - who mingle on the periphery of the performance, are entitled to mock both spiritual and temporal subjects, and through their distractions infuse a lighter side to otherwise serious matters. The whole gathering begins to resemble a country fair, as the jolly and convivial assembly - many turning out in their vibrant finery - further entertains itself in lively conversation, the playing of an assortment of games and the imbibing of copious amounts of food and alcohol. Tshechus may end with the bestowing of powerful blessings, delivered orally by a high lama or visually with the unfurling of a huge appliqué thangka representing Guru Rinpoche and his Eight Manifestations. The commanding backdrop of a monastic fortress, the visual extravagance of the dances, the cacophony of musical accompaniments, the solemnity of chanting mantras, the artistic splendor, the unfamiliar smells and the overall exuberance of the diverse crowd lend the scene an extremely exotic air.
Click here for festivals dates for 2021 | 2022

Bhutan is an ecological wonder. Rising from the Indian plains to the Tibetan plateau, it is a natural landscape of immense beauty and diversity. Folds of forested hills, rugged cliffs, fast rivers and young valleys fall from high snow-covered peaks. Austere barren expanses stretch between colossal luminous veined mountains. Patchwork fields of subtly contrasting hues nestle within spontaneous kaleidoscopic vegetation. There are a great variety of individual locales, differentiated by their particular combination of altitudinal, climatic and topographical conditions. These harbor a wealth of flora and fauna, the sheer mass and variety of which is almost unparalleled within such a limited space: giant rhododendron and rare orchid, majestic tiger and quirky takin, colorful pheasant and graceful black-necked crane.

More remarkable still is the manner in which entire ecosystems remain relatively uncompromised by human activity. There is little evidence in Bhutan of teeming masses uncontrollably jostling for tenuous positions or the commanding technological innovations with which man has wrested control of his environment from Mother Nature. Most inhabitants still realize a simple sustainable existence within their dominant natural settings. The inhospitable mountainous backdrop serves to both inhibit whole scale human encroachment and accentuate the primacy of the natural world. Ecology thus survives in all its immense complex multidimensional totality, perpetually interacting within understated natural habitats and relatively stable hierarchies.